Book Discussion: Polly Bemis; The Life and Times of a Chinese American Pioneer 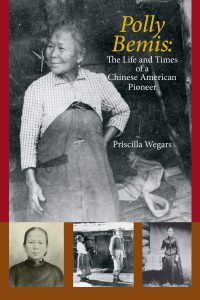 “Polly’s life was genuinely fascinating, and it is time to both celebrate the known facts about her and allow the stereotypical, undocumented legends to die out.” Dr. Priscilla Wegars

Join us for a presentation and Q&A with Dr. Wegars as she presents the true story of Polly Bemis.

It is time to “set the record straight,” as Idaho author, historian, historical archaeologist, and artifact analyst Dr. Priscilla Wegars explains in her 2020 book, Polly Bemis; The Life and Times of a Chinese American Pioneer.

During this book discussion and presentation with the author, discover the real-life story of Polly Bemis, a Chinese American who lived in Idaho’s backcountry for over 60 years. After audience members will have the opportunity to ask Dr. Wegars questions about the intriguing and complex story of Polly Bemis.

As you learn Polly Bemis’ story, enjoy general admission seating, a cash bar, and concessions for purchase at the Idaho State Museum. This presentation and author Q&A is free and open to the public. Admissions to the new exhibition, “Trailblazing Women of Idaho,” is included with your registration. Polly Bemis is featured in the exhibition as Made of Steel.

We are following current CDC guidance related to masking and physical distancing.

Polly Bemis, the mistakenly named “Lalu Nathoy” of books and film, was forcibly brought to the United States, and to Idaho Territory, in 1872 when she was just eighteen. In 1894 she married a Euroamerican man, Charlie Bemis, and they moved to a mining claim on the remote Salmon River; Charlie died in 1922 and Polly died in 1933. Since her death, Polly Bemis’s life has been greatly romanticized. Supposedly, she was a prostitute, “Hong King” was her Chinese owner, and Charlie Bemis “won her in a poker game.” Not one of these statements is true. Polly’s life was genuinely fascinating, and it is time to both celebrate the known facts about her and allow the stereotypical, undocumented legends to die out.

“Imagine a child—feet permanently deformed by a cultural fetish—raised in destitution; a teenager discarded by her parents, sold to a slaver, pressed into a trans-ocean voyage to a country and language entirely foreign, enduring a horseback journey for hundreds of miles through a wilderness to an isolated mining camp, consigned a new name, never to see or communicate with friends or family again, yet somehow still composing a vigorous life that endeared her to all: this is her story, definitively and meticulously captured by astute historian Dr. Wegars. More than that, it’s the story of an era on a river where people sustained each other with shared work and food, words and kind considerations.” — CORT CONLEY, author of River of No Return and Idaho for the Curious