The Sister Alfreda Elsensohn Award for Outstanding Service was initiated in 2008.  It has been a joint award given annually by the Idaho Heritage Trust, Idaho Humanities Council, and Idaho State Historical Society to recognize outstanding service by an Idaho museum, historical society, or interpretive organization/association.

The Award is named for Sister Alfreda Elsensohn, who founded the Historical Museum at St. Gertrude in Cottonwood.  Sister Alfreda, one of Idaho’s outstanding historians, sought to collect, preserve, and interpret artifacts from Idaho County and the surrounding area to better educate the public.  A museum is a bridge which links the present with the past, she often said. It is her vision of Idaho museums as exciting, interactive, and educational institutions that the Award seeks to recognize by honoring one outstanding Idaho museum, historical society, or interpretive organization/association.

The following criteria will be considered by the sponsors each year in determining the awardee for that year.  Additional criteria may also be considered.

While only one Award will be given annually, it is the goal of the sponsors to have a fairly even distribution of the award in the various geographical regions of the state.  There is no application form to complete; the sponsors select an awardee each year.

White Spring Ranch Museum and Archive Library, Genesee, Idaho receives the Sister Alfreda Elsensohn Award for its outstanding work on archival, artifact, and display preservation. Given annually by the Idaho Humanities Council and Idaho State Historical Society, the Sister Alfreda recognition includes a $10,000 award to be used by the awarded museum, historical society, or interpretive organization to continue its educational efforts.

On Saturday, July 11, at 1 p.m. a formal presentation of the Sister Alfreda Award will take place at the White Spring Ranch Museum/Archive Library, Genesee, Idaho.

The White Spring Ranch was established by John and Mary Lorang in 1885. The original homestead home was expanded in 1890 and 1904, until it became a grand (one of John’s favorite terms) home with two stories and an upper balcony. It is said that people would often ask to stop on the farm to rest on their journeys through the area because it had become a beautiful park with all the unusual species of trees and plants that John had collected and planted there. The grove of trees that are there today was included in the listing of the ranch as a National Historical site, as of January 6, 2004.

For a full listing of Sister Alfreda Awardees click here 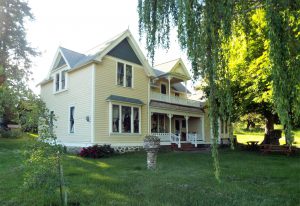 White Spring Ranch is listed on the National Historical Registry and was the homestead of early settles in the wheat producing Palouse area south of Moscow, Idaho. John Lorang and Mary Gesellchen Lorang created a successful farm and they and three generations of the family preserved all its history from its founding in 1885 to the present day. 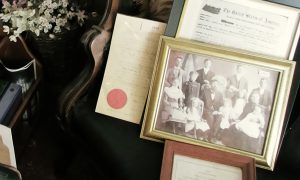 John Lorang had a passion for photography.  Hundreds of his photographs were left upon his death in 1926.  Lorang’s son Henry, and grandson Dan, preserved his photographs and added their own to the museums collection. Over 140 years of journals, letters,  books, magazines, and newspapers have been archived.