The historic buildings in Franklin date from 1872 and include the Lorenzo Hill Hatch House, John and Ann Doney House, Franklin Co-operative Mercantile Institution, and the Relic Hall. These historic properties provide a unique opportunity to travelers along the Pioneer Byway in southeastern Idaho to gain a comprehensive overview of the region’s history.

On April 26, 1910, Idaho’s Governor James H. Brady proclaimed June 15th to be Idaho Day in honor of Franklin and its pioneers. The declaration was the result of research and lobbying conducted by Franklin’s Idaho Pioneer Association. The Association collected affidavits from early settlers in order to show that Franklin was Idaho’s oldest town. Franklin continues to celebrate Idaho Day every year on the last Saturday in June.

Today, new interpretive exhibits in the Hatch and Doney houses serve schools, travelers, family reunions, and other events held in southern Idaho and northern Utah. This site is managed through a community partnership with the Franklin Pioneer Association.

Admission to Franklin sites is free, but donations are welcomed.

In 1872, Lorenzo Hill Hatch built his elegant stone house on a large lot on Main Street in Franklin, across from the city square. As the town’s first mayor and second Mormon bishop, Hatch was Franklin’s temporal and spiritual leader from 1863 to 1875. He was also the first Mormon legislator in Idaho.

Born in 1826 in Lincoln, Vermont, Hatch’s parents were early converts to the Church of Jesus Christ of Latter-Day Saints, who moved west to Nauvoo, Illinois. In 1851 Hatch settled in Lehi, Utah where he married Sylvia Eastman. He served as mayor of Lehi and was elected to the Utah legislature. Like other men prominent in the church at that time, he had plural wives’ marrying Catherine Karren in 1854, and Alice Hanson in 1860. With his wives, he fathered twelve daughters and twelve sons. In 1863, Brigham Young, President of the Church of Jesus Christ of Latter-Day Saints, sent Hatch to serve as Bishop of Franklin.

Lorenzo Hill Hatch’s stone house is a rare Idaho example of the Greek revival style of architecture that was popular in Utah during the 1870’s. Its rectangular proportions, symmetrical doors and windows, and spare but graceful wooden detailing echo the style that Mormon pioneers brought to Utah from upstate New York. The carefully cut ornamental stone blocks on the corners (called quoins) are also typical of the style. The materials for most of Franklin’s stone houses were quarried from a small hill just northeast of town by immigrant English masons. The elegant Bishop’s house was the largest residence in town when it was built and is still an impressive sight.

The house was occupied by Bishop Hatch’s descendants until the 1940s. The Idaho State Historical Society (ISHS) acquired it in 1979 and actively assists in the maintenance and management of the site. 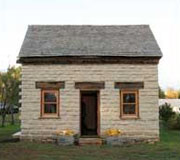 The Doney House is what remains of a larger home built by John and Ann Doney circa 1870. Its west and south walls are constructed of cut sandstone blocks with its east and north walls built of sandstone rubble. Threatened by demolition in 2002, the ISHS acquired the building and moved it to its present location. Preservation work is ongoing.

The log Relic Hall, located west of the Hatch House on Main Street, is a good example of Depression Era rustic architecture. It also represents a successful early effort to preserve and interpret community history.

In 1935, Franklin’s Idaho Pioneer Association deeded a building lot to the State of Idaho, and the state legislature appropriated money for construction of a hall. Architect Chris Gunderson produced a rustic log design intended to evoke the region’s pioneer past. The Forest Service provided the timbers used in the building and the Civilian Conservation Corps crews provided labor. The hall was completed in the spring of 1937 and dedicated in an Relic Hall interiorextravagant two-day celebration on June 14 and 15. An advance advertisement listed, among other attractions, a merry-go-round, a Ferris wheel, “the best array of concessions ever” and Steven Terry with his famous wire walkers and lions. Speakers included Governor Barzilla Clark and the only living pioneer adult of 1860, Ann Chadwick Hull. Exhibits inside the hall have remained relatively unchanged since they were installed in 1937.

In 1923, Franklin’s Idaho Pioneer Association bought the old Franklin Co-operative Mercantile Institution Building (located between the Hatch House and the Relic Hall) to use as a museum. Elliot Butterworth, a storekeeper and long-time Franklin resident collected momentos of the town’s past, which comprise the majority of the artifacts now displayed. When he ran out of room in the Co-op building, he led an effort to acquire new federal and state funds for construction of a new Relic Hall. The Mercantile building is not currently open to the public, but visitors are invited to enjoy the exterior view.